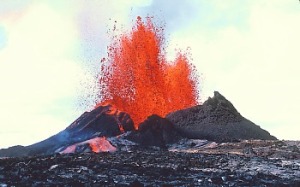 There have been explosive eruptions at Kilauea. The Uwekahuna Ash was erupted about 1,500 years ago and may be related to an older caldera that filled with lava prior to the development of the present caldera. The Keanakakoi Ash was erupted during weeks or months of activity in 1790. The early activity was driven by degassing magma that interacted with groundwater. Later eruptions were driven by steam explosions. Hawaiian warriors were killed near the end of the eruption by what geologists call a base surge. Surges are gas-rich and have little volcanic material. This “steam blast” was not enough to burn their skin but did cause them to suffocate. A 1924 eruption was caused by a 660 feet (200 m) drop in the lava lake that allowed groundwater to enter the conduit. The resulting steam-driven explosions shot rocks weighing several tons as far as 2,600 feet (800 m). At the end of the eruption Halemaumau was 1,320 feet (400 m deep) (deep enough that the Empire State building would fit inside) and had doubled in width from 1,400 to 3,000 feet (430 to 920 m). Note that these explosive eruptions are infrequent.

“The company in advance had not preceded far before the ground began to shake and rock beneath their feet and it became impossible to stand. Soon a dense cloud of darkness was seen to rise out of the crater, and almost at the same instant the electrical effect upon the air was so great that the thunder began to roar in the heavens and the lightening to flash. It continued to ascend and spread abroad until the whole region was enveloped and the light of day was entirely excluded. The darkness was the more terrific, being made visible by an awful glare from streams of red and blue light variously combined that issued from the pit below, and being lit up at intervals by the intense flashes of lightening from above. Soon followed an immense volume of sand and cinders which were thrown in high heaven and came down in a destructive shower for many miles around. Some few persons of the forward company were burned to death by the sand and cinders and others were seriously injured. All experienced a suffocating sensation upon the lungs and hastened on with all possible speed.”

Written by Kamakau and reported in Westervelt’s Hawaiian Legends of Volcanoes.

The eruption also killed eighty Hawaiian warriors about six miles (10 km) southwest of the summit. The warriors were returning to the Kau district to defend it from an attack by Kamehameha. Some viewed the eruption, which reduced the strength of a rival chiefs army, as a demonstration of Pele’s favor of Kamehameha. Kamehameha ultimately united and ruled all of the Hawaiian Islands.